Hi there. You’ve made it.

It was with this simple opening, Jason Dunn, the AWS Community Builders Program Manager made my day. Well, my night in fact, it was October 16, almost 10pm. After the initial rush of joy, the impostor syndrome kicks in—as if Jason was reading my mind this sentence came: You’re exactly the kind of person we’re looking for. I felt welcomed. Being part of this community has been such an incredible gift. Now, after 6 months I looked back in my journey so far and can say without a doubt how my growth as a cloud professional was boosted by and from the community.

The Great Flood of LinkedIn Contacts

After the welcome calls, the “Community Builder” started to materially, so to speak. We put on our LinkedIn and Twitter bios and used our organization, this very yours here in Dev.to and identified ourselves with logos, cover images.

This lead to we followed each other in several networks, but in LinkedIn was a Great Flood. In the early days were dozens and dozens of invites. Some people felt overwhelmed. For me, I can see, even is not a “business contact” or I fully know the person, I can say I enriched for sure my feed. In Brazil, the usual LinkedIn content is “fell good” or “hustle” stories or success cases. Then, I got content—great content from several aspects of the cloud.

I think I could found a quality in the quantity of new contacts of LinkedIn because we share somebody of knowledge, challenges and information we find relevant and common topics. That’s what’s makes a community.

Be a community builder can be also somewhat be a full-time job. As part of Amplify’s Discord, and with a “Community Badge” after interacting within one or another thread, people just popped from nowhere, sometimes without any context, asking for my help, sometimes with code snippets and in frameworks and didn’t have any knowledge. 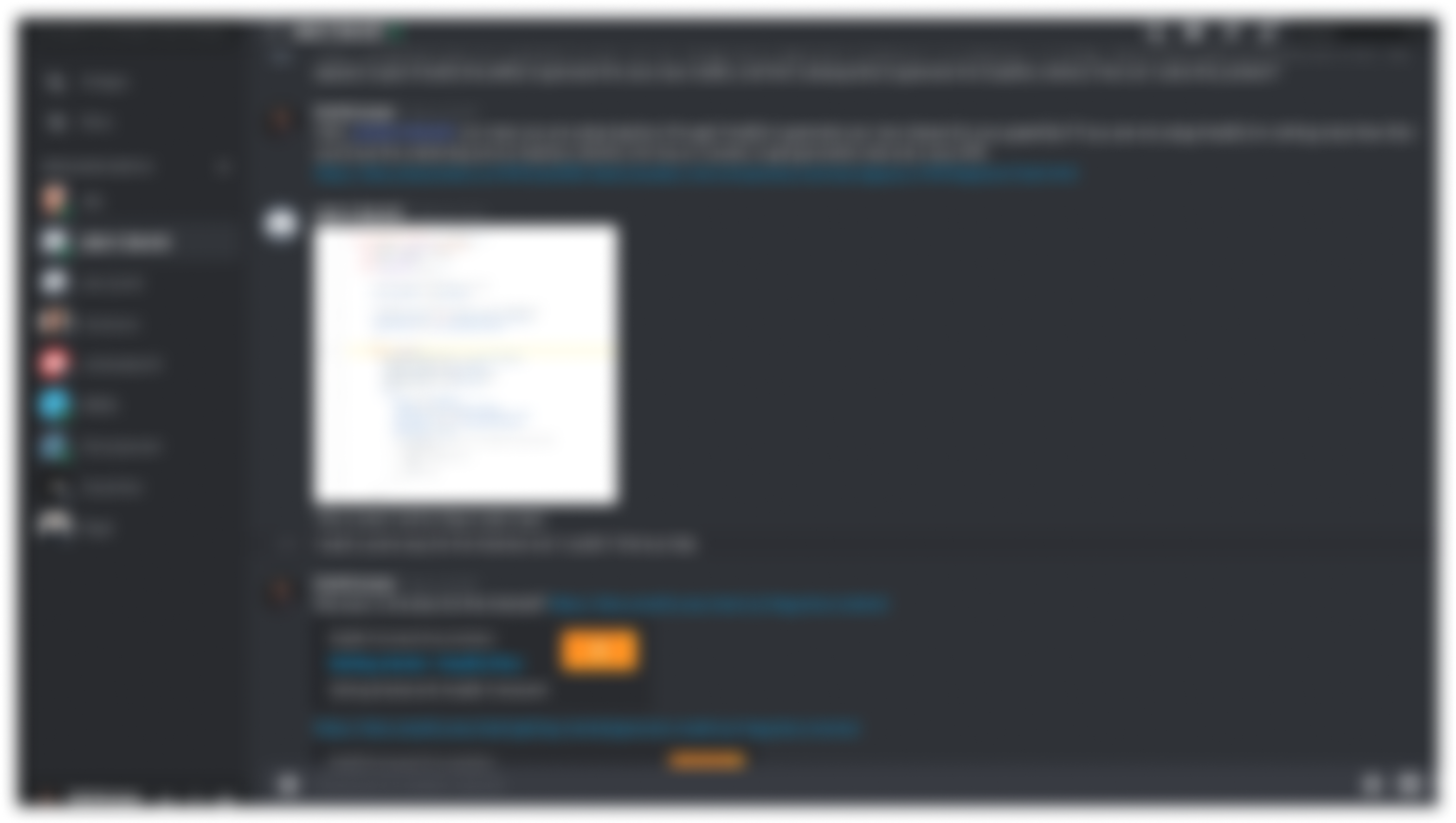 My first approach was to treat this as “random acts of kindness”—I was once and I’m very often in the web looking for answers, what I can help just happened of I’ve seem that before. I would help as much as I could and I even got surprised by helping people in frameworks I don’t have any leverage. What—the snarky voice in my head says (and now writing in English, sounds exactly like Corey Quinn’s—you are doing unpaid job and loving it. Yes, that’s right. First, I volunteer. Second, my daily job is to help developers understand better their contexts and tools and doing this kind of invisible, no glamour job, makes me feel giving back to community as much as community gave to me. Every npm we download to our node_modules there’re a person and a chunk of that person’s hours and life there. Most of the time I just point a way and people find themselves. And not one doesn’t say thanks until now (Side note: I can barely imagine what could be the life of an AWS hero! If I, receive one or two per week of these, in several platforms: by email (I think they find through my LinkedIn or GitHub), Twitter or Discord, imagine they, with a much bigger platform and role). I grow helping others.

Tupi or not tupi?

Tupi people were one of the most many peoples indigenous to Brazil, before colonisation—and then, you know, the genocide happened and their lands became a country. But Tupi is sort of “Brazilian stamp” and it happens to sounds close enough of “To be” and it was created by the Brazilian poet Oswald de Andrade in his 1928’s Manifesto Antropofágico, or Anthropophagic Manifesto. Earlier this year I made a post with this phrase as title on my blog.

Very simple example, data in Brazilian Portuguese is date in English. It looks little but data and date are so ubiquitous in programming, be front or backend that is easy to find someone confusing the terms or using one meaning to another and so on, because of the cognitive dissonance.

InfoQ, a software development news outlet has a Brazilian version that published its last Brazilian Portuguese content in February 2021. This was the reason, in my attempt to “translate”:

In these 12 years a lot has changed too. And one of the many changes was that more people, in this software development market, learned English. In special this more seniority level public InfoQ Brasil target. With domain in reading English, we realized that makes little sense to these people wait weeks, months, to consume a content in Portuguese translated by us (Translator’s Note: We Brazilians just call Brazilian Portuguese as Portuguese), with the original content at a click to be accessed.

There are a lot of incentives in play to this. The audience is bigger and, to be quite frank, there’s a bias against content in Portuguese in relation to a content in English. I know this because I have this bias, even writing original pieces in Portuguese for my blog, and committed to do so.

There are Brazilians developers that choose to do their total online presence in English, I don’t like the idea. It’s like had to act with an online persona than what I am – a Brazilian developer in an interconnected World where English is on programming languages and the language where the most important conversations and discussions happen. I was afraid to even publish something other than my mother’s language. Besides self taught programmer, I’m self taught in English as well. To find your “voice” even in your language is very difficult, is a process that you start by emulating others until you feel more comfortable, find your “voice” in another language is really really difficult. And this was an issue because I didn’t want to create lists of things or just write for the sake of publish something in English. Then, inspired by a promotion to first-time serverless writers from Serverless SuperHero Jeremy Daly’s off-by-none I published Serverless Transformation at a news media outlet in Brazil

Which was a written version of a talk I gave at Serverless Week 2020 from AWS User Groups here in Brazil which was my first talk about anything Cloud. Here on dev.to and shut down the internet for the day and I ran to hide myself under the covers. I won one of tickets and the The Developer’s Guide to Content Creation gave a lot of insights on how to produce better content. I had this article for so much time in my draft and then… I got feedback. People came to talk to me.

Regarding the choice “Tupi or not tupi?” my approach is not to choose. I tweet both in English and Brazilian Portuguese, use my personal blog for posts in my primary language and dev.to posts for content in English. There’s a lot of work to be done in Brazilian Portuguese to help educate and bring to teach people who lack the opportunities to learn and develop their English skills. And I’m committed to help my peers.

Be heard, and listen

After that, I publish some post after, both in English and Portuguese. Engaged in some courses and the talks from AWS Community Builders help so so much. I have a tremendous respect for all Developer Advocates from AWS, and there are so many, but James Beswick help me a lot with all his great content. He motivated me to explore more of my writing. So, I worked on a long form piece I was thinking a lot about in the space of serverless. At the same time, The Developers Conference Innovation accepted a talk addressing the same subject only in a form of a question instead of an assertion: “Serverless is Ready? We, Developers, are not”, so my focus was more on the side of make a case for Serverless readiness. So, for the first time I spoke at a large audience and held the honor to present myself as “AWS Community Builder”. 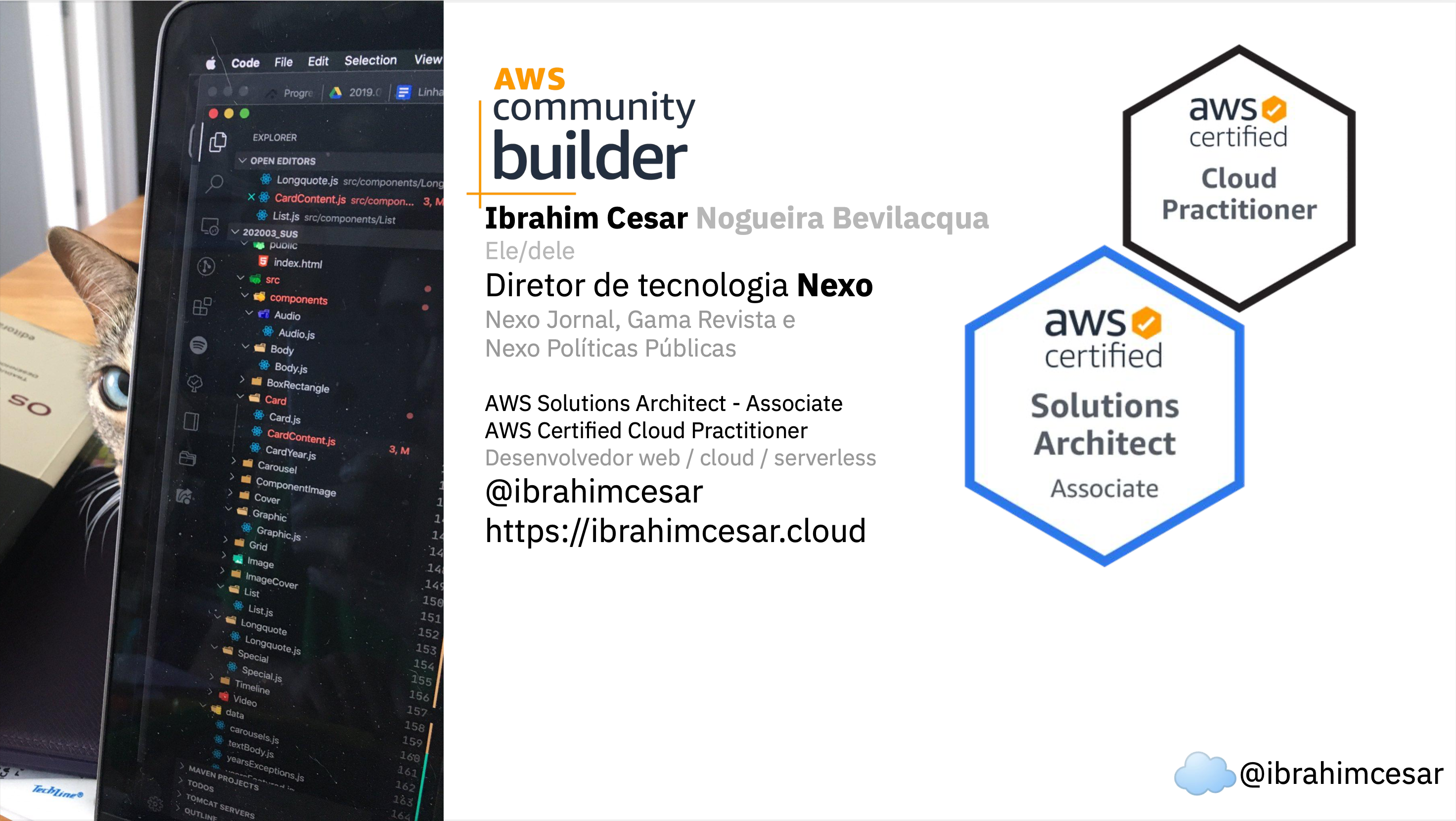 After that I published the piece on a lot of concep, I know I will sound a totally fanboy, but I was exploding in joy with the reception. They cited me in my favorite readings on serverless: 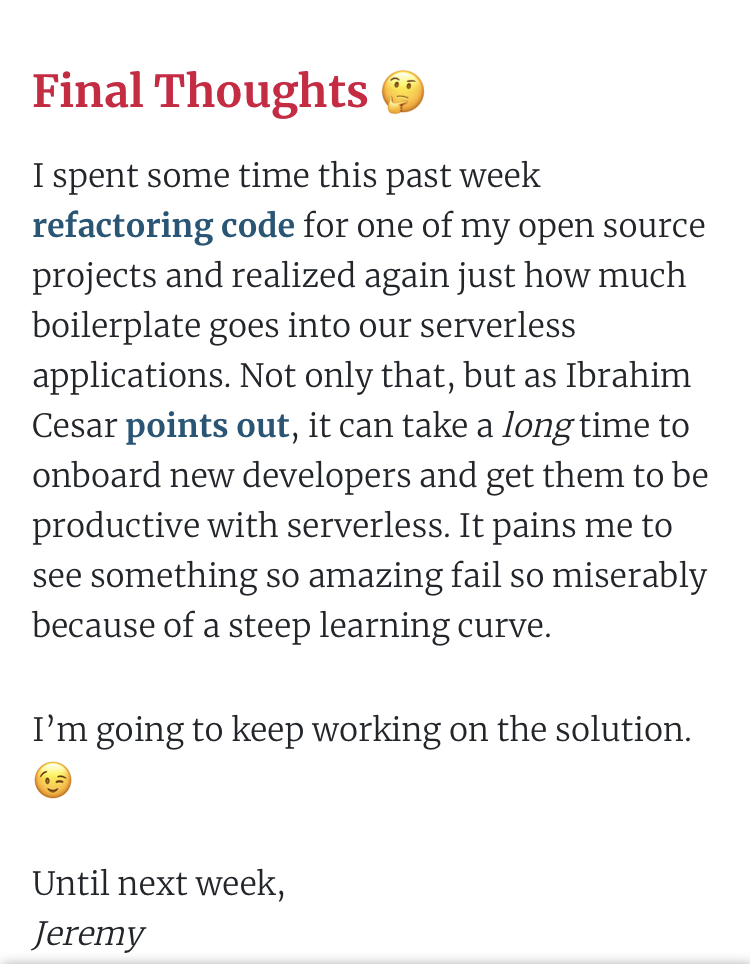 The awesome Serverless Status from Cooperpress: 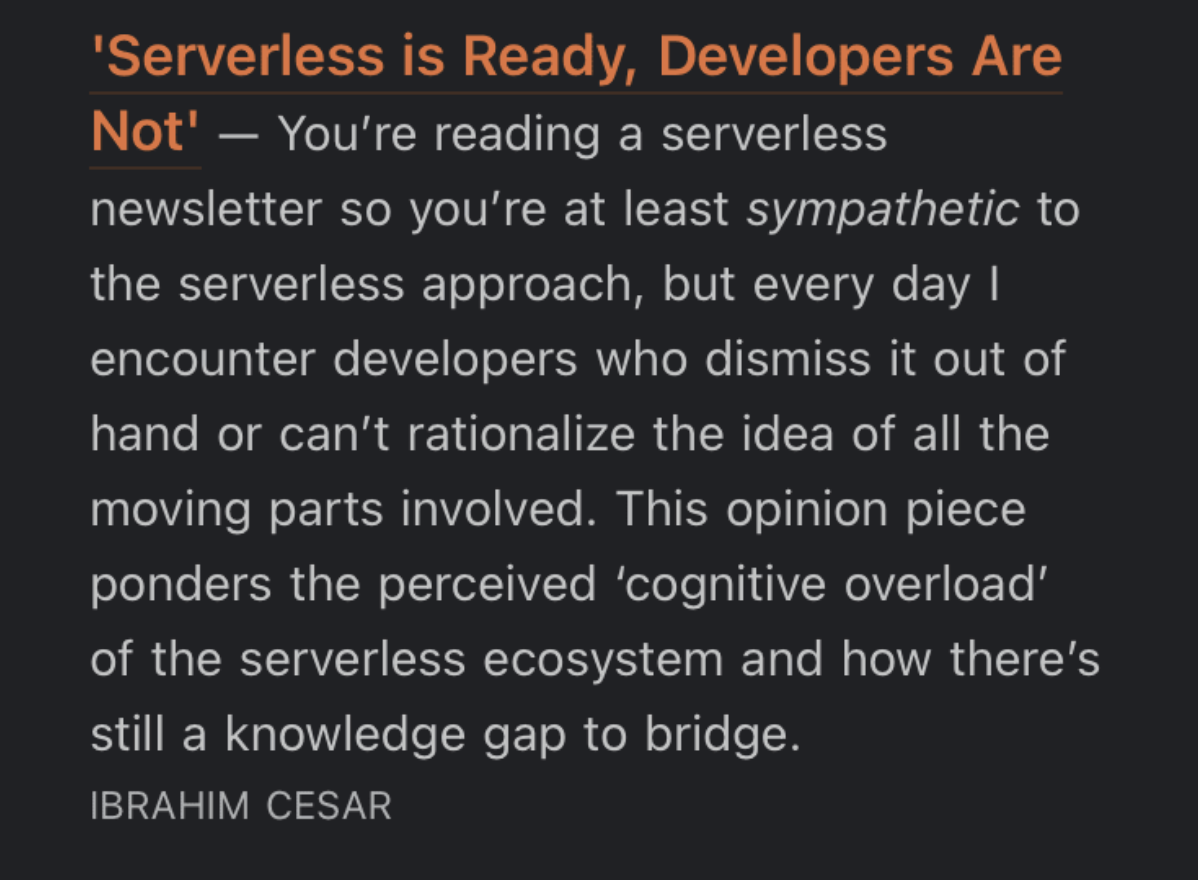 And Serverless Transformation - by Theodo. You can see that even my first post in English. how much they influenced me. 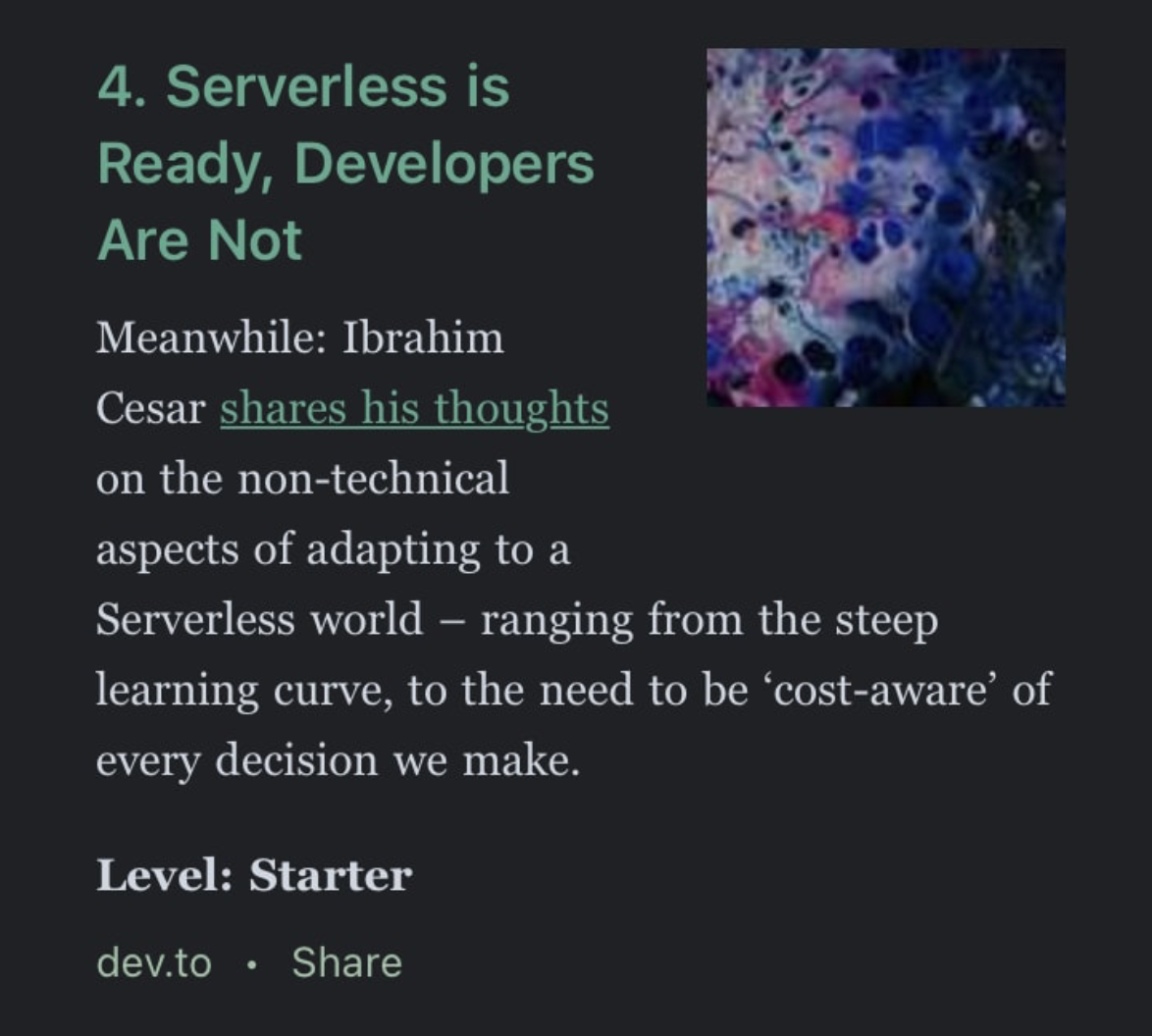 I could not believe! I got featured on my own Big Three source of news for serverless and resonate with people I respect from the community.

My take is, "#Serverless is ready. Developers are ready. Organisations are not."

Often organisations are cast with the 'evil spell of fear' by traditional thinkers. Lock-in, agnostic, etc., spins them and slows their progress. https://t.co/wJXoStoAJF

I felt I existed out there; you know? I could make an impact and not only listen but speak. Heard. Dialog. Interchange experiences. Grow together.

"Serverless is Ready, Developers Are Not".

Serverless isn't simple. @ibrahimcesar put into words something I've been thinking about for a while. When I see just "create a Lambda" in the AWS docs I wince because... it's not that simple. https://t.co/JiBlcNLgBT

“Political” is for some people like a “reserved” word we can’t use in certain contexts or at all in tech. I think is misled, confusing partisan with political. Politics is the set of activities that are associated with deciding in groups, or other forms of power relations between individuals, such as the distribution of resources or status. A technology is a tool that is used by people for some purpose, usually to further their own interests in a society comprising other people. That makes it political.

So being part of the AWS Community Builders gave so much: a “place” to feel welcomed, peers I admire, access to so much content and people that I can learn a lot (and for Brazilians, right now, courses or anything paid in dollar is very difficult—A financial benefit I got from the program was a free voucher to the Solutions Architect exam - which I passed last February). And even without any coordination I was fortunate enough to appear in AWS Startups on my birthday!

A great thank you, Jason Dunn and Elise Greve! You made the difference for me! I hope others along the way! 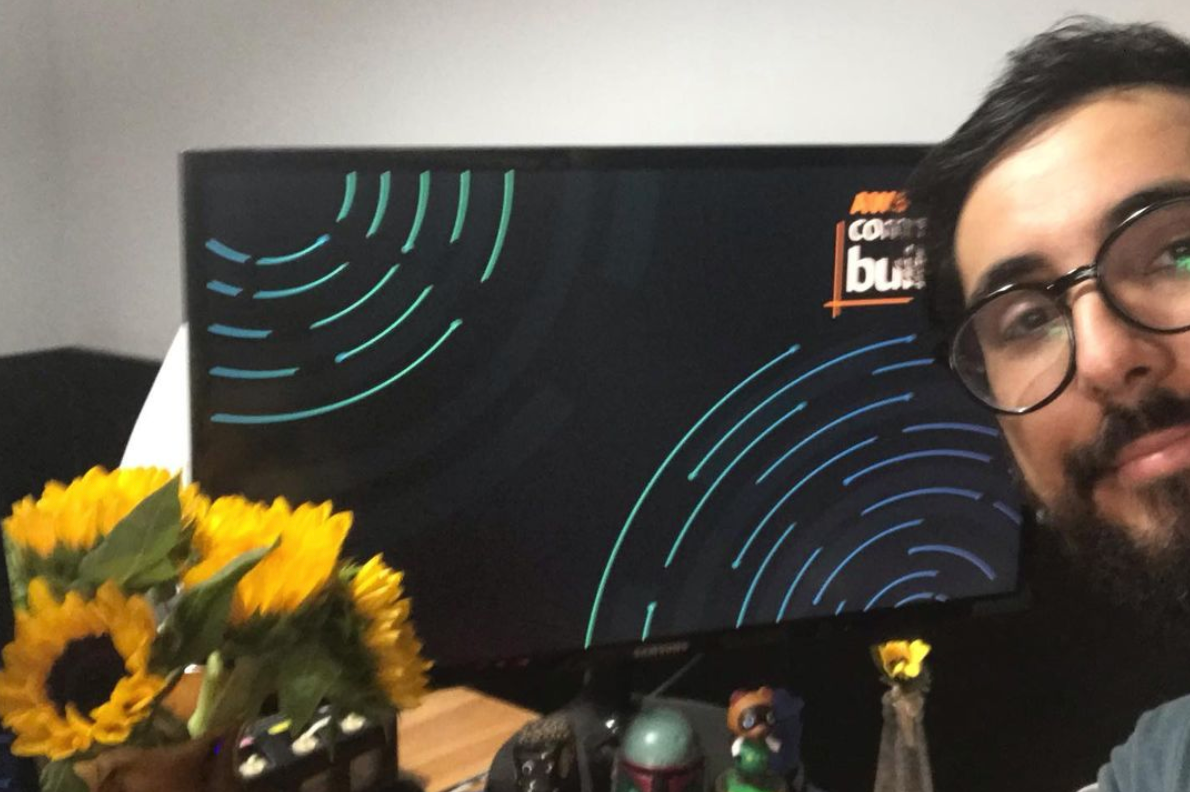 Hello, thanks for reaching the end! Thanks for reading. Please leave your thoughts, takes and insights on Twitter!